Good afternoon, gentlemens! So, now each one of us gets some beer, and let’s begin, introduce yourselves… 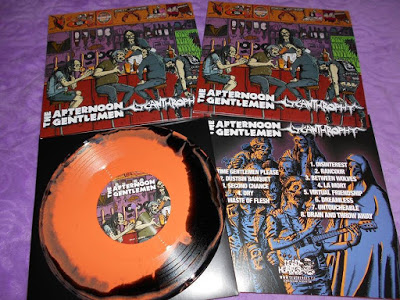 This year The Afternoon Gentlemen has been very productive already, a new LP and a recent split with Czech brothers-in-grind Lycanthrophy. What’s the feedback on these releases? Also, is that it for 2015 from you? Or maybe you plan to release something else this year?
Well not really, actually, we’ve been pretty lazy this year! Last year was pretty busy for us; George joined the band (Xmas 2013) and we spent the first part of 2014 practising, teaching him parts, and preparing 25 new songs, then in May we did a short tour with the Danish thrash f(r)iends of ours MARESVIN, then in the summer we recorded ‘Grind In The Mind’ 7”, the s/t LP, and the split 10” with LYCANTHROPHY (all done in the same session). Shortly after the recording session we did a full UK tour (with FAMINE and SHOOT THE BASTARD), then later that year we played at September to Dismember fest in Italy, and did a short Euro tour with FAMINE and CHIENS (including playing at Grind Here Right Now fest in Germany).
The artwork and layouts for our LP and also the split 10” took quite a long time to finish, and then we had colossal delays at the pressing plant (due to the bullshit known as ‘Record Store Day’), so those records ended up coming out a lot later than planned. That’s probably why it seems like we were very active in 2015!
In fact, 2015 has been pretty quiet for us, aside from the releases. We’ve played at No Fun Intended fest in Leeds, Grinding Delemont in Switzerland, we did a short weekend tour with MAGRUDERGRIND and BOAK (amazing grind/pv from Scotland), including Temples Fest in the UK (who seemed to have a problem paying the bands they booked), and also a short weekend with WHORESNATION and DEATH TOLL 80K, which ended at Chimpy Fest, the UK’s premier (i.e. only) grindcore festival, in London.
As for feedback on the new records, I’m not too sure really, but we’re reasonably happy with them. We’re slowly getting some new songs together at the moment, so we’ll hopefully be ready to record some new stuff in the later part of 2016. 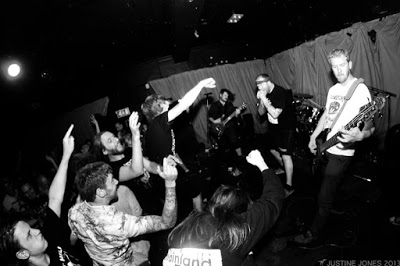 So, yeah, 2 releases with a little time gap between each other. A reasonable question to ask: do you plan some tour in support of these two releases, say, in Europe?
Personal circumstances within the band have changed a bit over the last couple of years, so we can’t play as much as we used to. A few years ago pretty much the whole band was unemployed and we all lived in the same area, so we were constantly active, but it’s not quite as easy now due to work and family commitments (we’re getting old!).
That said, we’ve just confirmed a 10-date European tour for October 2016 with WEEKEND NACHOS and WORMROT which will include Bloodshed Fest, so that will give us chance to support our last releases and play in a few new places. We’re also going over to play at Maryland Deathfest next year, and hopefully we’ll squeeze in a couple more gigs or festivals over the course of the year.
Elliot, I remember something about you managing your own label. Tell us about it, please.
Well, it’s not much of a label to speak of – just a poggy tape label I use to release my currentgoregrind band. Since I moved over to Switzerland I have to occupy myself somehow whilst not grinding or eating cheese, and what better way than laboriously dubbing tapes one-by-one in my front room? As I said, for now CHOOTHAR TAPES only exists to put out small DIY runs ofgorenoise tapes made by myself and my housemate Andi, but next year I’m probably going to start to release tapes from other bands. 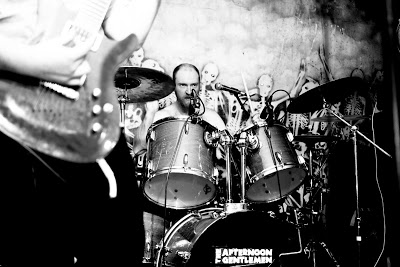 Polygamy is not allowed in England, but still you can play in many different bands. Tell us about other bands you perform in, gentlemen.
Oof. Not sure I can name them all, but here goes:
George – FAMINE (killer grindcore/pv), DOG EGGS (rock n roll fastcore), ONA SNOP (pv/fastcore).
Rich – GETS WORSE (Leeds powerviolence), MOUNTAINS CRAVE (atmospheric black metal), HARROW (new Leeds grindcore band), SLOTH HAMMER (doom/drone/harsh)
Mick – TRACK AND FIELD (indie rock meets classic 90’s emo), DUNCEWATER (2-piece punkrock n roll)
Adam – TRACK AND FIELD, WAR ALL THE TIME (Scandi-style Dbeat champs), LOS PECADORES (instrumental surf rock), DUNCEWATER
Me – NASTY FACE (2-piece old schoolgoregrind), KASTRATED (UK brutal death metal), BEG (grind/hc/noise rock mashup), BULLSHIT EMPIRE (Swiss grindcore)
You know, while I was observing Britain’s scene I came to the conclusion that characters from Lewis Carroll’sfamous book warped into it from different dimensions and hang out with you. Especially The Afternoon Gentlemen reminds me of a tea party with hallucinogenic tea hosted by the Mad Hatter, hehe. Why there are so many crazy bands in your country?
There certainly are some colourful characters to be found if you go down the punk rock rabbit hole, I can definitely think of a few March hares and mad hatters I know of. Maybe it’s the combination of relative affluence and grinding boredom? I don’t know about ‘crazy’ bands, but the UK always seems to be disproportionately represented, regardless of the style of music. I guess we’re just lucky to have a fairly fertile musical heritage and culture. You can probably trace it back to the rock n roll boom of the 50’s and 60’s, but I also think the industrial revolution and the fairly dense, concentrated population is a big factor. There are a lot of sprawling urban areas in the UK, which makes the formation of bands and scenes easier compared to bigger or less densely populated countries. Then it tends to snowball; the more bands and music venues there are around the easier it is for new bands to start, and the more inspiration there is to try something different or new. 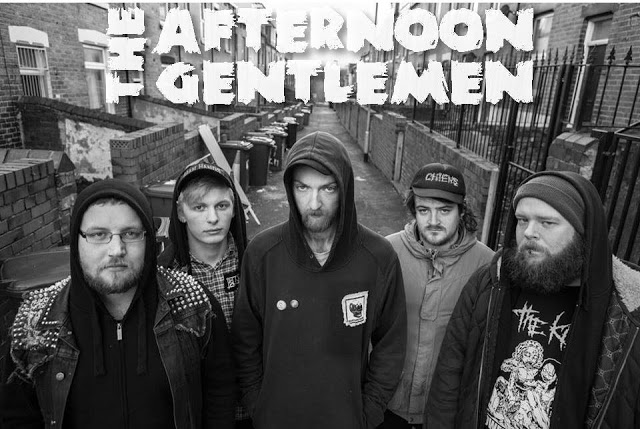 The gastronomical tastes of Britain’s people sometimes confuse me, for example, tea with milk, seriously? Maybe you have some exotic alcoholic drinks, I don’t know, beer with milk?
Aye, we have our fair share of interesting beverages. Milk stout (dark beer containing lactose), for example, is very good for babies, and accounts for the physical prowess of many Britons.
And a bit of a generic question: have you ever had fights in the pub with Irish people?
Certainly not! The Irish are an excellent bunch in my experience, and fine companions for a pint or 7, provided one steers clear of the thorny business of Parnellism (and doesn’t invoke the one-legged men).More likely to have craic than a crack.
What emotions do you feel when after a live show there’s people that you don’t know come up to you and say thanks for your performance?
A heady mixture of confusion, hubris, and surprise. 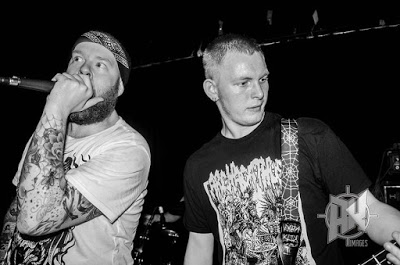 Well, time for a philosophical (in a way) question: imagine that you have an opportunity to go back in time and change one and only one thing. What would it be?
I’d go back in time and bring Bob Marley back to life, so I could jam with him.
And who’s this psycho who made the artwork for Power JooglePogger Violence 10” and the split with Chiens? His artwork is drooling with highly concentrated weed and acid.
That would be our pal PoggerJord, though he’s more of a sozzler than a psychedelics man. He does loads of great artwork for bands and graffiti/art installations, you can find more of his stuff at http://poggerartwork.tumblr.com/ and https://poggerart.wordpress.com/
Can you tell us about your deal with Dead Heroes? Because they already released two of your records!
Pretty simple really, Ondra (Dead Heroes label chief) likes our music, and we like him. He and his brother Peppa are both pretty active in the Czech and UK DIY scenes, and we’ve had nothing but good experiences with the label (actually DH have helped to release 5 TAG records so far). Ondra works really hard putting out lots of great releases (pretty much exclusively grindcore and powerviolence vinyl), distro’ing even more records and selling at local gigs, helping to set up tours for overseas bands, and generally putting a lot of time, effort, and money into the small underground network of bands. He also does an excellent paper zine called COMMUNAL GRAVE that features interviews, tour reports, reviews etc. from various international bands. I would advise anyone vaguely interested in this kind of music to keep an eye out for upcoming DEAD HEROES releases, as I know there are some excellent new records on the way. Big respect to Ondra! 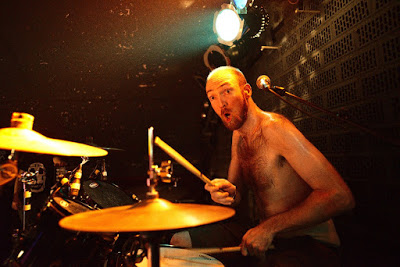 By the way, about being a gentleman, when was the last time you helped an old woman to cross the road, or helped a pretty girl to go over a puddle? (And of course it’s not only for being a gentleman, it even could help with seducing this pretty girl later, hehehe)
Last week I actually came to the assistance of a granny who was having a bad time of it in the local supermarket. I spotted her having a wee chunder beside the trolleys under the stairs (a plight that can befall any daytime drinker), so naturally I went over to offer her a carrier bag with which to catch said chunder, and a few tissues to wipe her vomit-spattered chin. She seemed very grateful, although I’ve no idea what she said to me. She might have been partaking in some sneaky mid-morning sherry which set off the old collywobbles, fair play to her if so. As for puddles in the street, I’m more accustomed to making them than bridging them to be honest.
Now I take this mug of beer, say “Cheers!” and drink it to the bottom! Thank you so much for this interview, guys, stay grind!
Cheers fella!
For more info:
Gentlemen fb         Gentlemen bandcamp