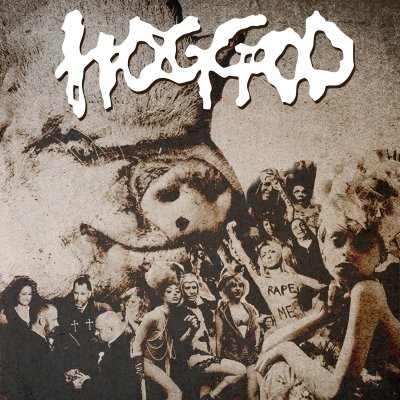 With each year Polish scene became bigger and bigger. Here are the newcomers – Hoggod! The band is a trion and they based in Bialystok city. Their lyric is sick, nasty and their sound is low and disgusting.
This demo was released digitally last year, but only now our guys decided to release it on tape, so let`s see what we got here.

Just look at this cover art and you will understand the way of thoughts of the Hoggod. Yes, these boys are playing nice and groovy A political goregrind. I can`t say that the general sound is very “Polish” (low and heavy with the metal notes), this sound has more from punk (warp-twisted but still punk sound!). The riffs are interesting, the guitar sound is messy but I still like it. The vocal has light marks of pitch shift and it actually sounds like a growl of the angry pig, haha! The drums are a bit cluttered but you can easily catch that snare sound.

An interesting release that is charged with a good portion of groove and madness. Let see what these guys will record next!