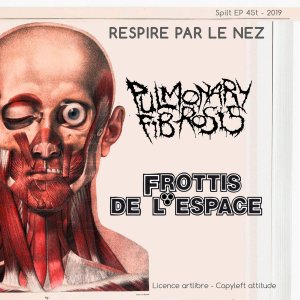 What do you imagine when you hear the word France? Elysian Fields? Wine and cheese? Creation of Gustave Eiffel? When I hear “France” I immediately imagine bloody bands like Blue Holocaust, Sublime Cadaveric Decomposition, Pulsating Cerebral Slime, Vomi Noir, and of course Pulmonary Fibrosis. I randomly talked out this split 7″ from my box with promos, and it`s a great catch! This small release shows us that even two absolutely different genres could exist in one release. From one side we have 2 super-heavy songs of putrid goregrind and from another 3 tracks of noisy hardcore punk! Intriguing isn`t it?

Let`s start from the grind side. My neighbors were super happy to hear this tasty noise from the French gore commando! Pulmonary Fibrosis, as usual, killed everything with its massive sound and smashing blastbeats. Pitch-shifted vocal like a fucking voice from hell it is extremely great and nasty! Chainsaw guitar and bass are here as well, they are simply grinding bones and guts! This is the insane but very short side, love this creepy shit!

To be honest, Frottis De l’Espace is a new name for me. Their punk is weird, guys don’t use usual structures and tempos, I caught myself thinking that they remind me something of the Japanese punk scene. This music is noisy and angry, it`s unusual material, but it makes you listen to this record to the end. Mostly this music builds on middle tempos, but the last song “Mon voisin terroriste” is fust, the last one is close to classical punk. I can’t say that I was 100% pleased by this music, but this duo composed really strange and interesting material.