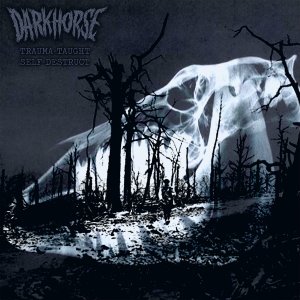 Sydney’s hardcore/crust maniacs Dark Horse are back with a brand new album! Trauma​​-​​Taught Self​​-​​Destruct is their 3d album, and I’m expecting a lot from it. We have here 12 songs wrapped in the nice gloomy cover art. Must say that the music is pretty dark, especially in comparison with the first album.
Everything (CDs and vinyl) was released by Grindhead Records (another Australian music maniac). So as you see we have here 100% Australian product, hehe…

Actually, I really waited for this album, and what I heard wasn`t that what I expected. I don`t know what the hell happened but this album is powerless. Generally material is ok (nothing new but…), I found some influences from Tragedy and similar bands. There is also a nice balance between d-beat parts and melodies… Not bad vocal line. But I can`t find the fire in these tunes (and again in comparing with Sick Of The Living​/​High On Death), I`m really confused right now. Somewhere in the middle guys slowed down which confused me even more. “Band Of Lost Hope” suppose to sound very atmospheric and dark but it didn`t happen((( Also, I have a question about the bass section it sounds very cluttered, yes I can catch it but as for d-beat, it should sound more powerful and more crunchy (like in fucking Motorhead).
Everything sounds like guys were forced to write and record this album… and I really don`t know what the hell happened. Hope with new songs guys will get back to their roots.