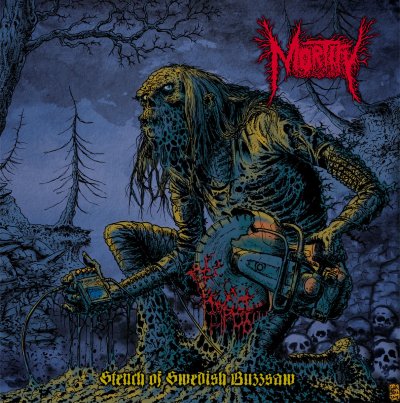 Let’s grind it out with Mortify’s “Stench Of Swedish Buzzsaw”. I think that not everyone is familiar with this band. This band started a few years ago, they got few demo works, but this album is the real deal. Line-up of Mortify is hell bright and interesting: vocal – Adam Jennings (Disrotted) / guitar – Koreeda (ex-Coffins) / drums – Ryohei Kikuchi (Su19b / Final Exit). Cool isn’t it?). The amazing artwork was made by Swiss Huere Artworks.
This album was released in all 3 formats (vinyl, CD, and cassette), I was lucky to get a tape (thanks to Grindfather prod). Unfortunately I have not the ability to compare the sound of this material in all formats, but this cassette looks and sounds good.

The debut demo was incredibly good and now I can listen to their full length… Damn, they do not disappoint and I can only speak about them in superlatives. I love the production, which Mortify managed to get… A sound, which fits this kind of rough, aggressive, and obscure grindcore. Someone said that Mortify reminds old Swedish grind… Hm, I think it’s part of the truth. Because, its dense and low sound rich with hellish heaviness, it also has a lot from old school death metal too. Every track is a skull-cracking assault. Savage roars, buzzing guitar sound, and crazy blast beats… everything here has top-notch quality.
I especially love the timing of these songs, almost all of them are under 1 minute, I must say it’s unusual and interesting to listen to this kind of music in such short format.
In the end I can only add that this album is a fucking ripper!