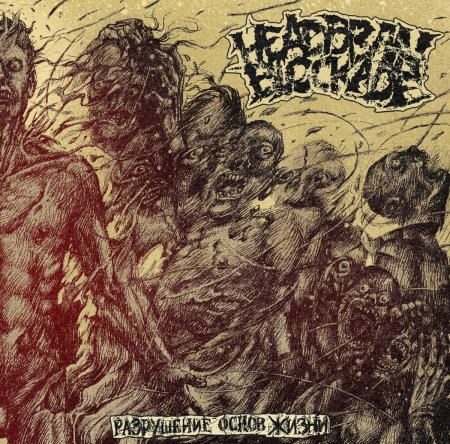 I received a very short and uninformative e-mail asking me if I was interested in reviewing the new Head Brain Blockade album. I had never heard of that band before, but I know that No Bread rec has good taste in music, so I figured why the hell not write a few words about this CD. A couple of weeks later the promo arrived in the mail. When I opened the box and give a first look at this digipack I recognized the artist that draw this cover art. That is my old buddy Jon from Kaliningrad, I can identify his style even with closed eyes, ha! Perfect work as usual. Mess of smashing, slaughtering bodies looks impressive I can even see and feel the agony on all faces, damn, that is so good.

I found HBB pretty interesting. This is an example of “hairy” grind… Guys are very influenced by early death metal band, so this album reminds me more Napalm Death (death metal period) and Brutal Truth. Vocally, well, you have your usual growls, even without screams. The guitar tone is cool, low and metal. Same I can say about bass and drums, unfortunately, this album devoid of vivacious energy, I believe that’s because guys don’t use much of punk in their noise. As many Death/Grindcore releases, yes it tends to get monotonous and a bit boring, but I discovered that the heavy choking atmosphere of “Destruction of Principle of Life” drives you to keep listening to it to the end.

It’s up to you to listen to this album or not. This is not a top-notch release, but on the other hand, it was interesting to find out one more grind name from Russian underground…