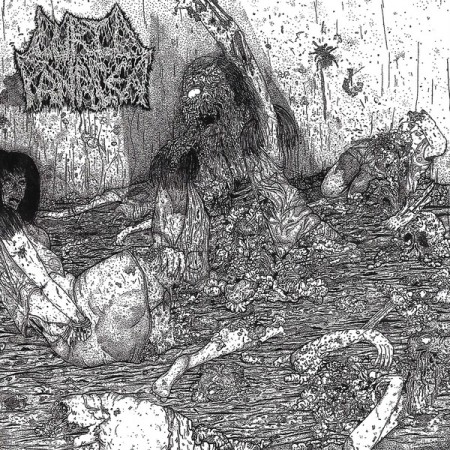 I have never been a fan of Brutal Death Metal, that kind of music is simply boring for me, but Lurid Panacea made me reconsider that. This stuff is pretty unique and interesting, also this shit will make you  puke your guts out. Believe me this noise is heavy as hell… So what is Lurid Panacea? It’s a project between two guys, Adrian (Incinerated, Involuntary Convulsion, Rawhead and many more) from Australia and Isaac (Hyperemesis, Orchiopexy, Sulfuric Cautery and a shit load of others) from Canada. This collision of two countries is bone crushing and really crazy. After a year of existence these guys recorded their first full length The Insidious Poisons, which has gruesome art and contains 47 (god damn) songs.

Both of the members have good experience with recording and playing different music, I guess that’s why this album sounds so good. Short, heavy and full of brutal energy – that’s how I can describe these tracks. Sound is heavy and low, it made my speakers vibrate like crazy, haha! As I said before, I was never a fan of this genre but this mix of Gore and Brutal Death is quite catchy. Furious blasting and sharp riffs are mixing together into something disgusting. I think the trick is the songs timing, each of them is not more than 50 seconds long. So you just can’t get tired and bored, because every song ends really fast.

I really enjoyed this album, this shows Brutal Death from another angle and I think even Grindcore fans will like this buzzing CD!

Remember guys,keep the underground music scene strong by supporting the artist/band/labels. Get your physical copy HERE!