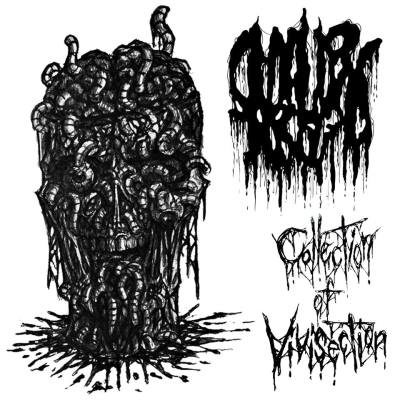 Thailand is a country sort of shrouded in mystery when it comes to Grind and other extreme genres of music. Hailing from Bangkok,Thailand Smallpox Aroma bring us a bone splintering dose of Goregrind and Grindcore. This release features 70 tracks from across their discography. The cover art is very simple and doesn’t distract you too much from the real artistry. Depicting a human head swarming with maggots and insect larvae. Now let’s dig into the massive feast laid before us. I must admit it’s definitely odd to hear Smallpox Aroma with a drum program/drum machine after being so adjusted to their sound with real drums. The first few songs are less Grind and more of a Brutal Death Metal/Slam feel. Which isn’t horrible because they still manage to mix in Grind elements throughout. Once the real Goregrind/Grindcore fury kicks in it is just endless. Gurgling putrid grunts,bone chilling shrieks,chainsaw riffs and pinging to high hell drums! The tempo never seems to hit a lull, constantly feeding your aural receptors into a woodchipper. The raw energy and aggression shown on this compiled release prove this band is a force unlike most others. Several times throughout this album I wanted to get up and dance because the groove was so thick. Other times I wanted to rip someone apart in a mosh pit. To say this album doesn’t have a bit of everything for Gore fans, is saying Thailand has no extreme music. Rating: 7/10 Smallpox Aroma fb