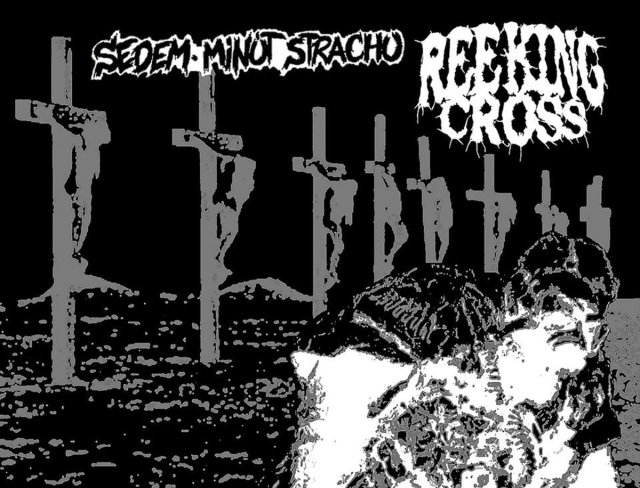 Prepare your earplugs, boys and girls, this is gonna be noisy as fuck, ahahah! As most of you know, the music (or noise – name it as you want) underground is one big family. And this family unites people from a huge variety of countries, of different ages and different alcohol tastes 🙂 So it isn’t unexpected at all that these bands’ paths have crossed.SMS and Reeking Cross have much in common, for example – both hate musical notes and play sheer improvisation and use just bass guitars and drums. The heavy primitivism of these groups can seriously damage your mental health and your ears.

The material of american RxCx captivates you with its primal fury. This shit awakes primitive cave instincts inside of the listener, ahaha! I like that Mason (Enemy Soil) keeps the balance distorting his bass, it sounds brutal but not mixing into one filthy piece. Throughout the heavy kicks from Jake (Tria k) we hear background industrial noises which add some cherry on the cake in this mixture. And in the end of this madness comes the scream of Paul (Wadge).

Smell well, do you hear this pungent onion stench? This stinkiness comes from Slovenian warriors of cacaphony and noise. Using two bass guitars and absolutely ill sense these guys produce true horror, aha! Thanks to these two instruments the sound comes out very solid and low…just like a powerful stream of energy, it will smash you to the floor and make you shake in convulsions. And the powerful stream of drum kicks and hell screams will make your ears bleed.Rating: 8/10 Sedem Minut Strachu Reeking Cross

You can order this tape from Grindfather prod!