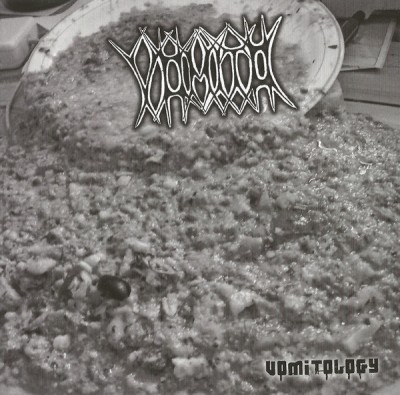 My dear friends, today we will plunge into the history of Brazilian gore. I’m holding in my hands the discography of one great and old band (unfortunately dead band). Along with such gangs as Lymphatic Phlegm and Neuro-Visceral Exhumation, Vomito were one of the fundamental bands in that part of our planet. This old vomit stench began to decay in the beginning of the 90’s, they existed for around 10 years (maybe a little less). And even in our days many freaks remember Vomito, and this small fact is awesome (and I think this it warms the hearts of the former members of the band). It’s funny that the designer chose this photo for the cover. It’s not gore it’s some type of healthy food propaganda, hahah)) A big bowl of oatmeal is flipped over, viscous mass on the floor (but honestly to say this photo is disgusting and reminds of a bunch of vomit. On this Cd you’ll find all of their records (some tapes and splits). The whole chronology starts from the year 2000 and ends with the 1994 release (Thus we may see the way from death to birth). The newer songs have more low sound with some death metal Influence… and the old songs are more primitive, with some punk taste (and of course with worse quality). Despite the fact that all the songs were recorded in different time intervals… the whole picture is so disgusting (in a good way), these noises have some dark aura (especially the first records). As you can understand it’s old and dirty gore, the tempos are not too fast, there is no pitch shifted vocals or dreadful blast beats… but this is a legacy of old times, and more shit should sound like this. Rating: 7.5/10

You can order this CD at Cemiterio Records