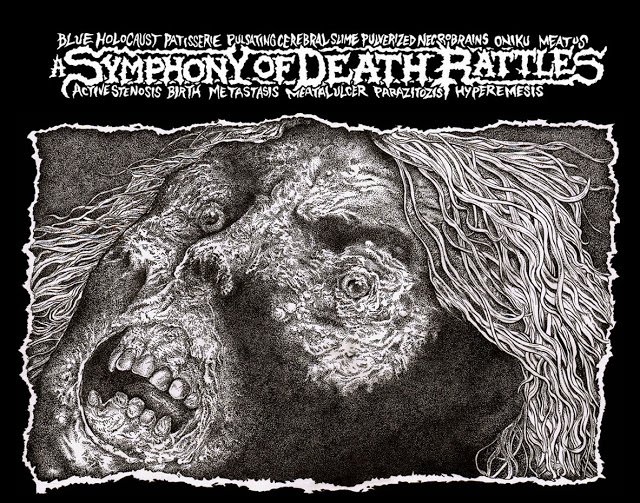 Oh boy this cassette is so badass. I guess every gore freak must have this one because it`s one of the best gore releases of last decade! “A Symphony Of Death Rattles” contains 12 bands from all around our fucking world. This creepy art was made by Pierre De Palmas. This strange face reminds me moment from old horror movies (I know that Pierre is a big fan of these stuff). Also this french maniac begin this gore story with his Blue Holocaust project. Everything starts after the spooky intro… vomiting songs with dirty sound and gurgling roars. Good old style riffs and rhythms… this is good example of old school goregrind. Guitar, pitch shifted vocal and hellish drummachine.
Next is Patisserie… one man band from Japan. That man is really Carcass fan… even through muddy sound I feel a big Carcass Influence. Riffs, songs structure… everything is so simple and it`s great! The sound is a little bit low but it doesn’t make any bad effect.
The Pulsating Cerebral Slime starts with noisy space intro and continues with dreadful slime blast. Their sound is heavy and slow, this monster will slowly swallow you. Except classic set this gore mess has a good punk rock smell whick makes this record even better. And one more one man band… this time from USA.
Vomiting beast Pulverized Necrobrains stand out with deep and low guitar sound and vocal vomits. Sharp riffs and good sound, stupid screams and aggressive roars. This gore mixed with some death metal sounds accordingly. I think this project is no active anymore, but this guy left a good noise for us. Onikuuuu! Ow I mean Banzai! Hehehe)) This is well known perverted project. That japanese sir makes a good noises, mostly it sounds like a grindcore/mince (just with pitch shifted vocal), not like classical gore. Somethimes these rhythms make me swing… and somethimes they smash me. Thats what I call good asian gore 🙂
Meet old stinky canadian cowboy with his mud monster Meatus! Yes I know this record has pretty shitty sound but just try to listen this stuff more carefully. These riffs are good (reminds a little bit mincecore especially Archagathus) with slimy swing rhythms. And of course lets not forget about this gloomy deep swamp roars (shit this vocal is so gorgeus).
From Russia with greek love! Next is act from Active Stenosis! Ioannis is a real gore master. He doesn’t use drum-machine he records every instrument by his own (And for this I have great respect for this guy). Hooo it`s a real dense stream of gore dirt! The sound is a little bit low but anyway this shit is so robust. The bass line at the end of “Simultaneous Dispersion” is so nice (that was a good idea to put that part there).
Here is a Birth! Birth of something noisy and freaky. This gore remind me Lymphatic Phlegm a little bit. Fast paced distorted guitars, good low vocal (with effects of course) and neverending drum machine attack… all these smeared with dirty sound. Birth it`s a great way to start your day, hehe)
Canadian beer lover Metastasis shoot 6 dirty songs for this tape. It`s totally not the best band here but this gore is cute. It`s not too extensive and extreme this material reminds me more old times, this stuff have a smell of 90-s. Not too low guitar not too fast drums, but this slime is not so bad.
Beware here is super ugly half rotten kangaroo which will smash you! Hahaha)) This is a very dangerous sounds… Meatal Ulcer is a real vomit monster with dreadful roars and low bass guitar sound. A ballistic fury of riffs and rhythms that sound more inhuman then human with belching growls Simple but nice songs will crush you with their weight…
Wow this is so dirty but so good. Here are big drugs dealers from Hungary with 4 songs. Parazitozis are playing a gore with good punk spirit… maybe this sound is not so good, but this material is so badass. This shit cheers up and adds strength. Crooked riffs, not perfect beats… this all sound so truly and sincerely. And finally the last one.
And here is a pretty famous band which called Hyperemesis. It`s hard to say how this nasty shit can affect the human psyche, haha!) There a lot of freaky samples which makes this noise gore even more entertaining. Wild riffs and distorted screams… these Canadian sasquatches knows how to do good noise. Put together stupid, simple, fast, dirty and ugly noises and bingo! You`ll have a great record 🙂