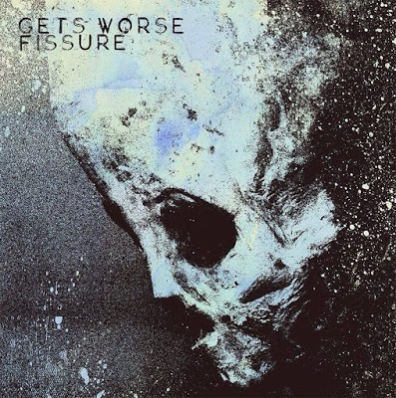 Recently I have reviewed a lot of goregrind and grindcore releases, so it’s time to turn our attention to other genres. The gloomy artwork on the cover of this release is hiding two tough representatives of hardcore/grindviolence scene . And following the rules, we will begin with the A side, on which British Gets Worse is conveniently settled… No offense towards the guys from Gets Worse, but with every record they seem to be less and less interesting for me. And now I heard their side and have nothing to remember, nothing has really impressed me. Just listened to the record and immediately forgot it.

The stuff from Americans Fissure was much more memorable and diverse compared to the British guys. Yes, maybe there is not a single hint of the old school, but after all, it is not an old band. Guys love hardcore, You can feel it, and it affects their creativity. There is no totally explosive blast beats and super density of sound after all but the boisterous rhythms in their themes have put me in good mood. I’m not a big fan of such around-hardcore music, but I liked these five short songs (especially gloomy intro for “30 Miles Of Diarrhea”).
Gets Worse — 6.5/10 Fissure – 7.5/10
Order this split at Dead Heroes rec!