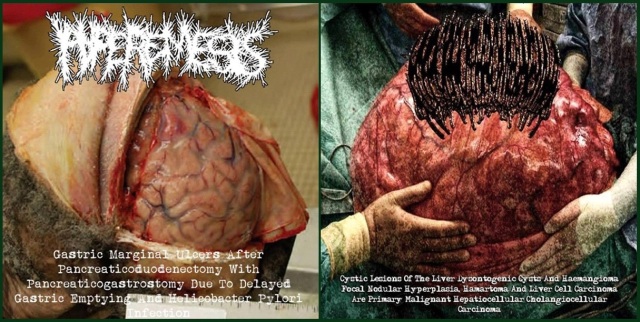 When everything goes boring, drinking much beer with friends is becoming a simple deal, and easy women are making you vomit, you understand that it’s right time to take it easy and to listen to something raw and not intrusive. And I had a chance to mention that the disgusting Hyperemesis / Hypoprothrombinemia are just in my hands. As it should be it is obviously covered with many tasty photos from morgues so, people who love to look at other people’s parts would be satisfied. If someone was interested and and may be someone else was asking himself what is exectly depicted on the disk…I would answer, it’s a monster from old school trash horror movie called The Deadly Spawn (1983).
Hyperemesis’ material here is stale like that bodies of the homeless in some morgue’s basement. They are recorded back in 2010 (and in addition they were used on the split with Hermafrodita). All tracks were recorded by Andy himself. He have been working on drum programming, he have written all the riffs and vomited in the microphone too. I can’t say it’s the best Hyperemesis release but it’s good enough. Gamy rhytms which make you wonna dance, raw and disgusting guitar sound.Dead drums sound which hits your ears, everything at all it went to be a great present for all fans of rotten, filthy music.
But gorenoise Hypoprothrombinemia haven’t impressed me much. It’s funny to listen like water is going from one toilet to another but for a few minutes only. But this bunch of noise isn’t my cup of tea at all.
Rating: Hyperemesis: 7/10   Hypoprothrombinemia 4/10

You can order this CD at Grindfather prod.