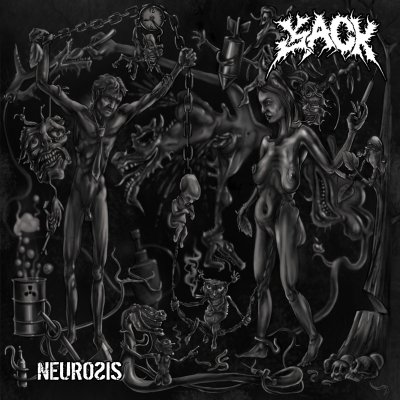 Listening to the releases of different times, you can admit on a subconscious level that there is some kind of similarity between Jack and Napalm Death, and the point here is not in the sound. With every new release, Hungarian brothers are adding more metal parts to their music. It can be felt especially well on their new album Neurozis. While holding this CD in my hands for a long time, I was looking at what the artist has painted … hmm, all those pieces of mutilated human flesh, dead babies and the general style of art reminded me about different releases of brutal death bands of 90s. Even if the sound has changed a little, the pressure stays on a high level. This album has proven itself well with its punch. It had some good acceptance in the world, the first proof being that Neurozis was released in as much as 3 formats. Each of the 19 songs is like a slap in your face. If you listen carefully, you can catch a glimpse of death metal on this record. But I can’t say that the songs here could be called diverse … the entire album is perceived more as a whole. The best that I can remember here is the intro, in which you can listen to a confession of drug addict. The confession describes how the use of psychotropic drugs made her accept Satan in her soul (so be careful with drugs, friends;))