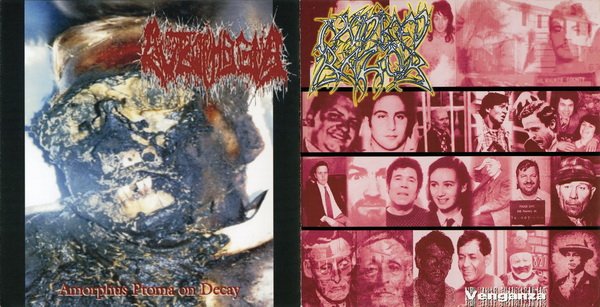 Well, at last this moment has come for me. I have to wear bathrobe to dismember and remove the corpses from the house. They occupy too much space, so there soon will be no place to dump fresh ones! How nice to ship still warm body of a young and attractive girl in a truck, when good old goregrind plays! Ah, I starve for beer now!)While I write these words, my player yells and roars, the good old split Oxidised Razor / Autophagia.This CD was released by Mexican label Diablos rec.
This split starts with my old friends Oxidised Razor! Once the sound rushes in, it immediately transformed into a stink, the stink of rotting lonely corpse, which lies somewhere in the suburbs of Mexico, eaten by maggots step by step… I’ve always loved these guys because of their raw and primitive stuff to some extent. They never tried to be at the top of Olympus, they do not look like the famous meat rolls – Regurgitate or Dead Infection, these guys are classic Mexican gore stagers, they are not onto the fancy sound! It important to notesay that this guys paid tribute to the most famous serial killers and maniacs, when placing them on the coverart.
But Autophagia comes from sunny abode of ancient gods of Greece!This one man band will be enjoyed by people with schizophrenia and split personality, fans of dismemberment and medium-grilled toddlers. I should note that all the stuff the man recorded by himself. It was a pleasant bonus for me that live drums were recorded.Still, I have to mention here that the guitar sounds very evil. Hats off for Angelos and his excellent refreshing stuff!