Hi, Shane! It’s an honor to do an interview with you for my blog! How’re you doing? Pretty busy with preparing yourself for the new gig, I guess?

That’s nice thanks We just finished a 5 week tour of the USA with VoiVod which went really well so at home now for 6 weeks trying to adjust to a different reality,by early next week I should be fine and ready to attempt gardening ha!

So, the world can now listen to your new album Apex Predator – Easy Meat. Congratulations with this anniversary (15th album after all!)! I think that this album is a result of your quest to find something new and different, a new road of progress for the band. Every track made me feel that you were really enjoying the process of recording, am I right?

We recorded the drums for the album at 3 different times over the course of last year and the songs although some of them were worked out before hand a lot off them came together in parts in a spontaneous kind of way ! I guess there wet certain goals for me personally that i wanted to reach musically – some of the riffs have an old school feel while others have more dissonance and weird structure.
We are all at a point where we love so much music that we are learning to sneak in strange nuances and these nuances help glue the old school pieces together.
I enjoyed making this album for the fact that it again came together is a bizarre way –  we never quite know what the other is doing sometimes until the very end.

Well, I just can’t skip this question)) Recently you have become a father. Does it somehow affect your ideology and world view?

Ideology is a word i dont think of but the world scares me more than say it did a couple of years ago,it always kind of has I guess but now that I have helped bring a child into the world  I do look at the world in a sceptical way i suppose and find myself questioning my actions and thoughts and worrying more about what time i have left on this earth and how i/we can make a decent  enough impression on my daughter so that grounds to be an intelligent and respectful human being a cultural being! 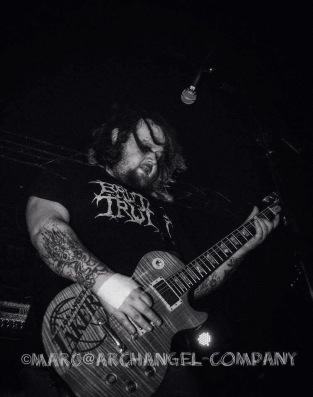 Everyone was surprised that Mitch Harris left the band for a while, we all hope he’ll be back. And ND currently have a new guitar player. Tell us about him a little.

Well we kind of have 2 at the moment – John Cooke who plays with me in in Venomous Concept stepped in for our european and japan shows last year and more recently Eric Burke from ex brutal Truth stepped in for the US tour we did with Voi Vod..
Both are great guys and more than capable of fitting into what we do and are helping us grind on while Mitch takes some time away from the rigour of ND life ! Mitch needs this time and his point in life and we have been friends for over 25 years..we owe it to him to give him his space for now…

You and Kevin Sharp now have two side projects together – Venomous Concept and Lock Up! What’s currently happening with these two projects? Do you actively writing new songs for their releases, right?

We just finished Mixing the new VC record which has turned out great,I am very happy with old school diversity on the record for sure and Kevin has done a stellar job on the vocals ! we are currently looking out for a label,I hope awe can get the VC record out before the summer kicks in fingers crossed!
Lock Up has been striding forward in the demoing department and theres about 17 new tracks thats have been  demoed! Kevin has written some lyrics and i have a bunch as well so we hope to record this album over the summer all being well!
I am eager to hear where we go with kevin on vocals now ! Anton has surpassed himself in riffing department on these new Lock up Songs,I have written a few but Anton has really delivered! 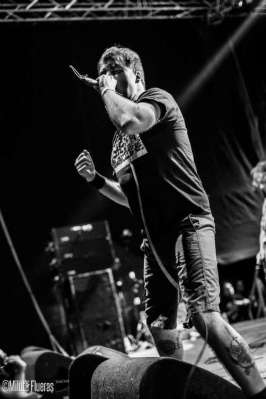 There was a really legendary event last year in Japan, I’m talking about reunion of oldschool guys of underground scene – Napalm Death, Brutal Truth and S.O.B.! I should say that I got my jaw dropped when I saw a poster! How was the gig overall? Did I get it right that it was a last show for Brutal Truth? Is there a lot of pleasant memories of meeting Japanese fans?)

We did 3 shows all together and yes I believe these will be the last BT shows !
we have all been friends for a long time including the promoters and crew that brought us out there so it was a lot of fun and i think a perfect way to say goodbye to BT,I am glad we got to do it,they were great shows and it was just a marvellous Experience !

Another boring question about live performances, you have to excuse me for this) How big will be a tour in support of a new album? Is there any chance we will see you in Kiev/Ukraine?

Well ND likes to play shows and the new record is just out! the last album we did over 2 years here and there os shows and long torn s so I am sure we will be down in the Ukraine at some point…

Shane, do you visit some gigs yourself (if you have enough time)?

Occasionally but lately I have been really busy i do try to keep my ear to the ground when possible!

Every band in their songs has some message for the listeners. In your case it’s horrors that surrounds people in life. Don’t you think that social shit becomes more and more actual problem with every year?

I think Life has always been hard,its becoming harder yes i think but injustice and indifference and persecution have always been here..The Hierachies and governments have always plotted against the people they are meant to to do right by and thus life for many people is tough.Technology is giving people access to just how much the world is in chaos,information speeds its way around the world much faster – because of this paranoia increases but many of these problems have always been here..I feel Numb really when i watch the news or see how attitudes have changed on the streets where i live..

What about attendance on your gigs? Is it important for you to have a huge crowd in front of you? Or you even ready to perform for 10 fans?)

We have been in situations where theres been 7000 people and where there have been 70 people ! sometimes the more intimate a show the better for me we perform the same regardless..
som days you can wake up and the day is perfect and then you walk on stage and feel terrible –  the crowd are great but you just dont feel it and some days you have can have a crap day and play to 20 people in a small club somewhere and the feed back can make you feel like it’s all worth it..

You have to be true to yourself and feelings but hopefully the music comes across with the same passion and makes people enjoy the show even if deep down we dont feel 100% we try to give 100% !

Every year you have a lot of live shows, visit a lot of towns. So here’s the question, Shane: what can you say about new bands? Which one of young bands impressed you?

Oh man it’s really hard question,I like a band called TEST from Sao Paolo they are a 2 piece but have an energy and chemistry which is fun too watch..I really liked TEETHING from spain as well nice old school kick in the ass stuff..musically i am no so sure its new but it has passion and power! 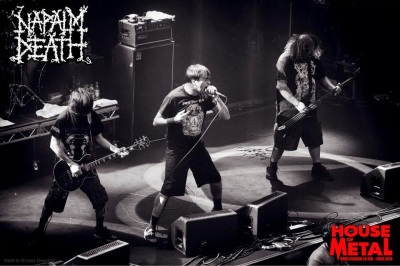 Let’s talk a little more about experiments. Last year you performed at the Roadburn and not only that, you prepared a special program for it and even released LP on this occasion. How did you come up with this idea? Does that mean that you are still able to surprise even the most wimp fan for years to come?)

I have always wanted ND to play a show where we focussed on our slow songs, now we have quite a collection so the Roadburn opportunity arose and i was very happy that we  could do it.. our friend Costin made the visuals for the show and i think if you watch it it brings Napalm Death to life in a much different way than usual and takes the band into a different direction which i love – still a really extreme direction and I hope we can get the chance to do this again sometime,it’s not for everyone but i loved it.
Part of the reason we opened the new record with a slow track was our love for this kind of dynamic !

What was the most ridiculous story about Napalm Death you’ve ever heard?

Mmm I dont know, I know once some argentinian paper did an interview with jess bless him and they made it seem like we we all lived in mansion in birmingham since the 4 of us lived together for many years.I think it was some argentinian UK thing due to the bullshit with the Falklands but we found it funny as our house was more like The Young ones (british Comedy) than a mansion with complete chaos and lots of beer drinking in our younger years !

Thank you so much for this interview! A couple of words for your fans from you))

Many, Many thanks for your support! I hope we get a chance to play some of the new record soon over there of you guys…
cheers!