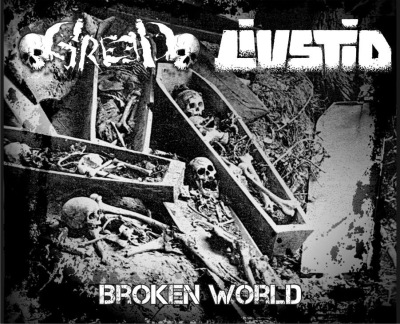 Today I would like to tell you about two great bands from completely different parts of the world. First one is a Mexican band GreeD and the second one is Norwegian band Livstid. They have met in a CD called “Broken World”, also designed as a gatefold with an interesting info list where you can find all the lyrics, so you can scream along with them bands, heh)To be honest, to me Mexico always was a country of drug cartels, tequila, huge cacti, guys in sombreros playing some sick gore/pornogrind, but crustgrind… I’ve never heard anything like that from this country! Young Mexican band GreeD, as far as I know, is a project of one of the bosses of a human organ’s local market (Diablos rec/Oxidised Razor). They introduced four tracks on this split. They sound like a great raw crust full of hate towards the world around us with its politics, money and lust for power! Yeah, it’s not a Disrupt or Wolfpack, but still made with diligence. They really impressed me with their stuff, special respect for song “Reality”!The other band is from Norway, also a country I know about not because of a punk/crust movement. But darksome vikings and black metal guys stepped back and gave way to a great crust/punk band called Livstid! 5 tracks of awesome and wind up music! I enjoyed the manner of performance and quality of the material, as I said earlier, made with diligence!