Holla amigos! What Pyogenic Cystclot is busy with right now?)

Absolutely nothing! We’re all doing our own thing. Musically, Mace is blasting away with his black metal band Infernal Execrator and I’m currently playing in a old-school death metal band called Battalion Slaughtered and getting ready to tour Europe with my other goregrind band 30XX.

You’re pretty young band. Tell us when you formed and how, what was the thing that made you create a band?)

This band is pretty much our old band, we just changed our name since we wanted nothing to do with that band, and have a fresh start playing goregrind.

Your guitarist Andrew is an American, how did he came to your band? Was he captured by bandits in waters of Singapore?)

I’m half Singaporean from my mom’s side. I moved to play in a melodic death metal band with our current drummer now called Helmskey. Soon enough got acquainted with more people who played in bands and we all eventually formed this band.

What about getting something to drink in bars?) What local brew is the most popular?

Too fucking expensive to drink in bars in Singapore because of the ridiculous alcohol tax. You’re lucky if you can get a deal on single small can of Chang (Thai) for $2.40. There’s not really a culture of micro-breweries or anything of the sort. Get drunk on shit beer on the streets. At least that’s not illegal.

No offense, but why did you tagged your style as Goregrind/Powerviolence? My thoughts, you’re playing pretty fast mincecore (IMHO).

I think we might be a bit too polished too call ourselves mincecore. But none the less, I’m glad you think so. Mincecore rules! 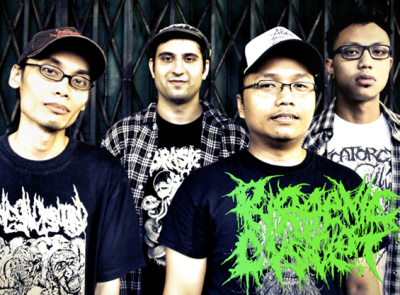 Recently you released split with American band BruceXCampbell. But I guess that youth is full of energy, and no doubt you already have something for your next release, right?)

Ahaha yes! I’m not sure if we’re all “youth” since 3 of us are hitting our 30s. No plans for a next release yet. If we can all manage to meet up and record soon that would be great.

How often you get the opportunity to perform live? I remember you played on Asian OEF last year, did you manage to swim in the dirt with Rotten Sound’s vocalist?)

We don’t perform live often at all since I’m living in the U.S. as of now and the rest are in Singapore. We didn’t do any mud-swimming with Rotten Sound but we got to hang out and drink with the far superior Agathocles several times during our short tour in Indonesia.

Fast and moderately raw sound on your split, is it what you wanted and looked for? Or you plan to experiment further?

Rawer would be nice and cheaper!

And what do you think about death penalty? Does people that made terrible crimes have a right to live?

Rapists and murders and child/family abusers haven’t a right to live. But I guess shit gets complicated and it’s happened enough where people who were innocent get thrown in death row. BTW drug trafficking in Singapore gets you the death penalty. It’s not worth doing any drugs in Singapore.

By the way, did you inherit from your parents their old records, vinyls and cassettes? I always liked to listen old rock bands that I get from my parents)

I’m so glad you asked this question! My dad has an extensive vinyl and cassette collection. Lately I’ve really been into Electric Light Orchestra. That band is sooo good.

Also, Singapore is well known for its language, mix of English and other Asian languages. Tell us about it, guys)

It’s called Singlish. It’s kind of difficult to explain, but always hilarious. You will hear “cheebai” from us a lot.

Forming of style and musical preferences is a result of something that affected you long time ago. What was the “roots” that affected music of your band?)

Definitely just cool goregrind bands. There was a point when we were all playing brutal death/slam and we decided “this shit isn’t even that fun” and just wanted to grind. Our main focus is always goregrind but whatever we think crushes will get thrown in there.

I always was into that kind of stuff, you know, finding new and interesting bands. What bands can you recommend to listen from your local scene (besides Wormrot, Demisor and Magnicide, of course)?

As of now, I think Daily Ritual is the sweetest band out now, if you’re into dark-punk wave. Snaggletooth are tight as well, doing Motorhead inspired crust. Abrasion is a two-peice grind-violence band that kills it. I’ll have to give some shout outs to our neighboring countries: Daighila from Malaysia play amazing emo-violence, way more intense and heavy than the other bands that suck at that style and get too whinny about it. Cystgurgle from Thailand are a two-piece drum+bass goregrind band much like Gored. And of course Proletar from Indonesia who simply grind and destroy.

Aaand our talk show is over. Thank you for your time, I’m looking forward to your new grind stuff!)

Thank you and keep grinding!