Hi, Giulio, how’re you doing? Already bought a yacht with the money from the tour and new album?)

Hi, I’m doing well. Keep on dreaming, with this stuff you can barely buy a new pair of shoes.

This year Cripple Bastards have beaten all records in terms of activity, hehe) You were in Japan, Australia, 2 Obscene Extreme Fests and 3rd is on the way. Such tight schedule is a result of a lot of practice or is it just mere luck?

We have been stuck for quite a long time from 2011 to 2013 because we decided to focus on writing the new album and practice as much as possible. Through all that period we got many good offers for tours and festivals and we just kept them in stand by to be re-considered at the right time. Now that the new album has been released we took the chance and did some of the most interesting ones.. OEF worldwide was a priority since Curby is a long-time friend of us and he always did the maximum for CB. Plus, it was a great chance to visit/tour 2 countries on the opposite side of the world we had never seen before, and it was amazing.  I hope you’re joking with that ‘mere luck’ thing, CB has been around since 26 years always backed by a very strong effort, it’s obvious that there’s a solid fan base all around, nothing happens by chance/luck.

And let’s not forget that you prepared a ton of merchandize and brand-new 7” EP. I wonder what will we hear on this vinyl?
FOAD Records released a limited tour EP (250 copies hand numbered on green vinyl) that was completely sold out throughout the tour. It included a cover of our Japan’s favourites S.O.B., a cover of our Australia’s The Scroungers and 1 unreleased track.

A little about exotic stuff: did you eat kangaroo’s meat in Australia, or maybe some other refined meals?)

When you’re on tour things are always rushing so there’s not much time to look around for exotic meals and strange stuff, it’s easier for me to get a kangaroo steak here in Italy than elsewhere, there’s a restaurant in Milano serving that shit.
By the way, the food in Japan was simply fantastic, I love everything in their cuisine.

How well your new album sells, how’s feedback on it, maybe you already plan to release additional copies?)

Well, the free copies that we got from the label got sold out in a breathe, especially the vinyl version.  We had to restock twice.  Then I have asked the guys at Relapse if they were satisfied with their sales and I got a very positive response. So it seems that it’s going well, I think it’ll need to be reissued on vinyl soon.

How’s F.O.A.D. Records doing now? I heard you went on publisher’s extibiion, how was it? And what should we wait from label?

You mean the MegaRecord Fair in Utrecht, yes that was good.. we do many festivals and fairs with our booth. F.O.A.D. Records is one the things I love most, it’s my job and a dream to come true. For decades I have been behind smaller labels but it was difficult to keep them together, then things found their right direction since I joined F.O.A.D… we are releasing the bands that we have been enjoying since we were kids, deal with our favourite music, take part in bringing to light the best quality records.  In the months to come we will have more vinyl released by killer classic bands like FEAR OF GOD, BULLDOZER, PAUL CHAIN, WEHRMACHT, CRYPTIC SLAUGHTER and tons more!  Check out what we do at http://www.foadrecords.it

Well, sorry, but I just have to ask about Italian cuisine) What’s the best Italian meal to have while listening Nero In Metastasi?)

Nothing. Just lay down in a dark room and play it. Fuck cuisine, this record has nothing to do with fun.

As far as I get it, there’s some story that your new album’s cover have. Could you tell us about it?

The album cover is a photo taken in 1976 in a small city near Milan that was completely contaminated by a dispersion of dioxin gas from a factory causing illness and death of several people. A friend working at a bookstore found it on an old magazine and suggested it to us – stating that according to him it was very much in line with the style and negativity of our lyrics. We thought it matched perfectly so we contacted the original photographer that made this incredible shot and acquired the rights to use this as album cover.  We have always thought that this kind of dark 70ies photos and imagery perfectly portray the feelings and mood that we want to express through our songs, so we’re very proud of this artwork.

Next question might sound a bit harsh or even rude, but I heard that some bands call you fascists, people in the Internet write that you play “hategrind”, and Italian nazi-band Still Burning Youth in their interview mentioned you as their favorite band. Isn’t it strange, what do you think about it?

You can’t control which bands/scenes you’re an influence for.  I have noticed people in the NSHC scene hanging around with tshirts of Minor Threat, Black Flag and Wretched but I don’t necessarily consider those bands nazi for having a part of their fan-base among that kind of crowd. Everyone is free to listen to what we do, I don’t give a damn if it’s a radical commie or an right-wing extremist. CB is a non-political outfit, we have nothing to share with any political view, our musical expression is all about negativity and hatred as a feeling not as a means for discriminations. So trying to give a political orientation to what we do means not understanding at all the contents of our records, lyrics and imagery… the fascist/antifascist issue is just for gossip-devoted pussies that have lost their passion on Grind and HC and rather spend their time inventing stories on people they don’t know anything about.

It’s no secret that you like Patareni. I heard that you’re good friends, and you even recorded some vox for their track. Tell us a little about your relationships. Do you often visit Croatia? How are guys from Patareni doing there?

Actually I can’t say we’re good friends. It’s a story of love/hate that has been going for over 2 decades.  I’ve been a fan of the band since my early days into Grindcore, never missed one of their records, I think I have all their existing stuff.  We first met over 20 years ago, I have attended their rehearsals, have helped a lot through the time selling tons of their records and so on. When the original singer Has left the band I have been asked to join and do the vocals on some studio recordings. One of the main reasons for him to cease singing was the fact that the main person behind the band had copyrighted everything related to Patareni/Buka making it a rigid private property in which any other member was just a session-man without any say in the matter. The funny thing is that this person has copyrighted around 600 songs, even some that never came out or that don’t exist at all! Having released bootlegs of other bands since the 80s, he probably prevents himself from ending in the same trap he often reserved to others. But even funnier is that fact that copyrighting all those songs, he should pay some fees himself to his country’s copyright association for self-releasing his own music, but since he’s greedy he won’t do it, so if you notice – a lot of Patareni releases appear to be unofficial or on some unexistent labels because he does bootlegs of his own music to climb over the copyrights he put on it, and avoid fees!! I have recorded over 20 songs with them in 2001 and only a few (5/6) were released. 10 years later, with the promise that everything would have been released, I recorded around 20 songs more… but nothing happened. Being a fan I have always tolerated all this madness, this self-copyrighting phobia and all the shit but seeing the effort of 10 years still completely hidden and unreleased it’s no fun anymore. Maybe one day I’ll get back on my feet but today I can’t say that I still have good feelings for such a psychopath. Just look at Patareni’s discography on Discogs to understand what I’m saying.. it’s all shady and half-unofficial, you can rarely see anything credited as fully official. It’s the result of all this madness, 600 songs copyrighted for a grindcore band… can you believe it?

What about cassette format? Have you ever had any thoughts about releasing a set of LPs on cassettes? I think it would be legen… wait for it…………………… dary, hehe)

Our new album will be hopefully released on cassette too, it’s in the plans. I prefer vinyl anyway, cassettes were great back in the tape-trading days when that was the only way for demos to circulate, with FOAD we still make a large use of old oscure ‘80s cassette archives to take out the most complete extensive discographies… but as a final releasing format for today’s standards and audio quality I’ll always prefer good old vinyl.

I’ve been on your live gig in Kiev and I should say that was great! Was there any requests to visit Eastern Europe again, Russia in particular?

Yes, we have received several offers for Russia. We’d love to play there, we’ll hopefully make it happen next year, this 2014 our schedule is really too full.

A lot of new bands mention you as their source of inspiration. Do you help young collectives? Maybe you give some advancement advices?

The only advice is to create your own thing with heart and passion without trying to be part of a scene or a trend. Just follow your feelings and try to portray what you have inside through the kind of expression that better fits your taste and inner spirit. Nothing else. 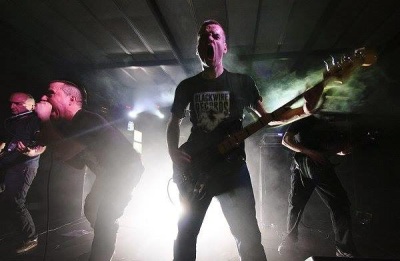 Do you have your favorite Italian bands that sound exactly how you like it?

Those that we covered on our “Frammenti di vita” album… Negazione, Declino, Nerorgasmo, Impact, Bulldozer, Jester Beast, early Necrodeath and so on.
That’s our roots and our influence from the past of the Italian underground.

Dear passengers, our plane landed, please, unfasten seat belts and head for the exit. Thank you so much for this interview, a few goodbye words for our readers from you, if you like)

Thanks for reading this and for your support.

For more info go to: