This interview was made for Ukrainian zine, but unfortunately it wasn’t released. I really don’t want that stuff to be in vain, so I’ll put it here.

Hi, Jan! How’re U doing? What’s going on there in your country?

Hi … I’m fine even though there’s so many things going on in our country thanks to our politician bastards.

The name Idiots Parade exisits about 7 years already, are U still full of energy? U dont want go away from underground and live normal shit-life, for example?))

Playing with Idiots Parade is still a great fun for us and I don’t feel like it should be changed in any way. We adapted our lives and our privacy to that, underground is the part of us and we can’t imagine our lives without it. To live an ordinary fuckin‘ life – that’s a horrible idea that gives me shivers. 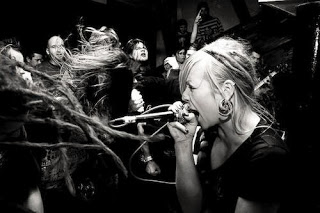 Do U remember your first performance on the stage? How it feels to play for so many people for the first time?

The first gig of Idiots Parade was taken in our home town of Zvolen. It was full of our friends who are still around us and it was a great atmosphere. I think I still have the video tape of that gig somewhere, hehe. Definitely it was very noisy, chaotic and short set. It had to be shock for few of those people who never came into the contact with such a music before.
By the way where have U found so beautiful vocalist? It would be difficult for me to believe that such a nice girl could have so powerful singing.

Robert did bring Petra to the band, it was before I started to play with them. My very first reaction, when I saw her in front of the mic was very similar to yours. I couldn’t believe where the hell she’s taking that power and aggression from!? From the very begenning she had this very extreme vocal that really doesn’t fit with her nice and sweet look.
Tell us about the membership of your group at the present moment. Are the members of the ID playing in the other groups? And why Robert left the band?

Except for Filip we all only play in Idiots Parade. Only he is activ in another band, in Jakubysko he plays guitar and use his sweet throat shouting. Jakubysko mix thrash HC riffs with fastcore and some crust perfectly. They have out two diy  releases and currently are working on the third. You should definitely check them out. It’s quite hard to talk for Robert, why he decided to leave. He was getting more and more busy with out-of-band activities, had no time for rehearsals. He did stop to play gigs and we had to play few already booked shows in three person because of that, with Martin on guitar. In the end we agreed that he‘ll just record the split LP with Abortion and that was the last thing for him in the band. It was quite a bad time but everything was solved when Filip came, we had taken the new breath and his enthusiasm really kicked us in.I’d be happy if this line up would last as long as possible. 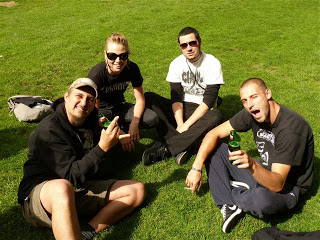 The tour with TFD was like one neverending party, hehe. We played ten gigs in nine days, in six countries. It was our first bigger tour and it was a huge experience for us.Nicolas and the grinders from TFD, they all were a great company and we had lot of fun together. We played at fantastic places, meet many great people and traveled few thousands kilometers, and it all went through without any problems. It was ten days of great mood, also thanks to the permanent alcohol intake, hehe. And even if we were tired a bit in the end, it had fill us up with energy for a long time.
You were playing with a great number of the grind-underground monsters. Playing with whom of them do U enjoyed most of all?

It’s very hard to pick up just one from that amount of great bands that we were honoured to play with on the same stage. Many great gigs we played thanks to our friend Richard in Ziar nad Hronom, where we played with bands as Unholy Grave, Capitalist Casualties, Catheter, Magrudergrind, Gride, Wormrot,  and many, many other fantastic bands. It also was really great to play at such a festivals as Obscene Extreme, Play Fast or Don´t, or Bloodshed fest, where you can see many great bands in one week.
Have U received the invitation from Ukraine? What is necessary for you to come here? I suppose that U are not very fastidious))

Last year they invited us to Uzgorerot fest, but we couldn’t go because of our duties at work. But for sure we are not against playing at Ukraine and hopefuly we will meet at some gig over there. We have normal needs, we play for gas, some beers, food and sleeping place, if it is somewhere further. No huge performance fees, hotels, backstage full of expensive drinks and foods … nothing like that, hehe. 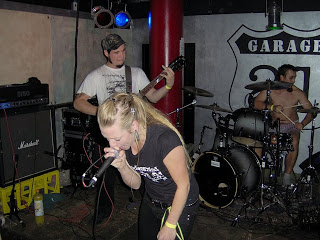 Now I want to ask about your creative work. You’ve make only two splits and took part in a few collections from the very beginning of the existing of your group. Do U think live gigs more important than recording?

For sure, one thing can’t exist without another, every good recording has to be equally well played on stage. You can release a billion of good albums, it’s nothing if there is no energy and power on stage. We don’t preffer one or another. It can be that we are not as active as some other bands in writting new songs, but on the other hand, to produce songs just to have more of them than let’s say Agathocles, it’s more likely a bad thing. We try to do things as we feel it even if it takes a bit longer sometimes.
As I know, your texts are only in your native language. Do U decide not to be tied up with a translation into English?

From the begenning we write our lyrics in slovak and we will stick to that. We are not that good in english to explain exactly our feelings and ideas in texts. It’s much more simple and natural to write lyrics in slovak to us. But we are not against the english translations as you could notice on our last split 7“ with SayWhy?. We are really happy when someone is interested not only in our music but in lyrics as well, and so those who don’t understand slovak can read them in english. 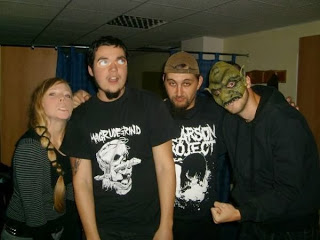 Lets distract at some serious theme)) What is your opinion towards the global problems of humanity, especially towards wars, because now are arising more and more conflicts, that makes us become alerted.

War conflicts are fortunately the thing that doesn’t tuch Slovakia diresctly, but of course you can’t ignore all the violence and useless killing in other parts of the world. It’s sad that some of those, who are in power, is building up their status on casualties of others – those who in naivity carry their good ideas. Policy, oil, financial institutes, war industry, nationality based hatred, all that are sources of evil, lead by those who respect none but themselves.
Probably your grop is not an exception and you like alcohol. What do you like to drink and how to spend free time? If U drink then maybe you have some situations when you was so drunk that U can`t remember your name?)))

Heheh … you got it …. hehe. We are definitely not a sXe band and we never will be!!! We like to drink everything, the more the better hehe. We have no favourite brand of alcohol, maybe Karpatská Horká,  that we drink quite often. We have a lot of drunk stories but I’m better not going to bring one up to not cover the most part of your zine, haha. 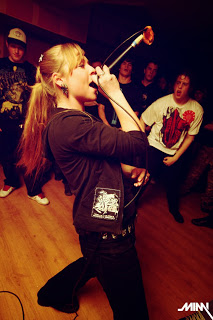 For a lot of time I want to ask this question and didn’t know who to ask)) Would U tell me about your grind-underground. Are the a lot of people visit concerts and what groups are worth attention in your opinion?

Slovak extreme ug scene is not that huge and powerful, but there is few bands that are definitely worth a check. The most interesting to me in the last time is probably Mindfuck, which is young band from Bratislava with Tomas (Beton) on vocals. Their raw oldschool grind is really powerful and smell after some old grinders as Regurgitate, Excruciating Terror or Discordance Axis. For now they are without any recording but they are working on demo so be prepared!!! In Galanta there is pretty well running grind Alea Iacta Est, who are working on the split 7‘ with RAS from Spain, that I’m really looking forward to. Attack Of Rage has the new CD out and also ever smilling drug free grinders ČAD has their new CD out. As about the audience on our gigs, well that depends, people here are becoming quite picky since we always have a lot of gigs here. With joy we recall the times when we had only few gigs a year and everybody went to every gig with huge passion. We used to travel several hundreds of kilometers, slept on railway stations and got back home for a lunch, hehe.
Jan, what are your plans for the nearest future and when at least we can see your full-length.

We want to concentrate on the finnishing of new songs for our firts full length the most, it will be out on Bones Brigade and T.V.G. records. We hope, if everything will works fine, the records could be out in the second half of the next year. We want to reduce live gigs to minimum until than, to have as much free time for thhe record as possible. Few weeks ago new shirts were released on EveryDayHate and maybe there are also hoodies in the begenning of the next year.
Thanks a lot for your answers! I hope we’ll see you here in Ukraine once time.

Huge thanks Sasha for your interest, I appreciate it a lot, as well as your support of Idiots Parade. Wish you best of luck with your zine, because fanzines are very important and awesome part of this scene.  Hope to see you one day over there, we will try your vodka hehe ….